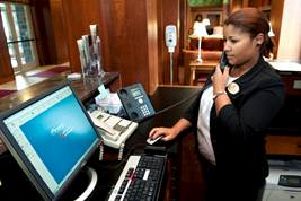 The first implementation of Unified Communications was at the end of July 2012 at The Inn at Virginia Tech and Skelton Conference Center. Representing the special case of the hospitality industry, the Inn presented challenges of equipping the hotel’s guest rooms, conference rooms, and public spaces, as well as those administrative offices that have communications services needs more similar to other university departments.